2016 Asia Pacific JA Company of the Year Competition was held successfully in Seoul, Korea from February 22 to 24.
CED student-company from Korea crowned as winner of the 2016 Asia Pacific JA Company of the Year Competition (AP JA COY) after impressing the judges with their strong business concept.
The team sought to develop an environment education game based on the concept of recycling materials. The team had received high praise from judges on their effective, well-constructed presentation, and their good understand as a team on what was going on with their company, products and future had also made a lasting impression. They also won the HSBC Best Financial Management Award. 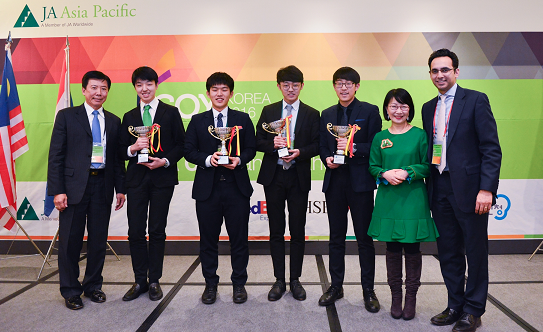 During the three-day program, student companies were evaluated by a panel of judges comprised of entrepreneurs, academics, and representatives from the local business community. The participating student companies also showcased their products and services in public at the Trade Fair in City Hall, Seoul.  To cheer for the students, JA Korea, host of 2016 AP JA COY has arranged a special performance – the Samulnori, a traditional Korean percussion performance using four different types of instruments. The Korean words ‘Sa’ and ‘mul’ means 4 objects and the word ‘nori’ means to play. To make the trade fair opening performance even more meaningful, the Samulnori performers are actually former COY Alumni! 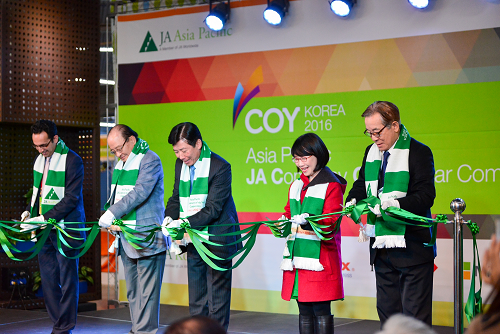 59 students from 15 teams representing 10 locations including China, Guam, Hong Kong, Indonesia, Japan, Korea, Malaysia, Singapore, and Thailand. Aside from student companies participating the event from the Asia Pacific region, SoberDrive Ltd. - regional champion student company from the United Kingdom for Skills for the Future program (representing JA Europe) had joined the event as the exhibiting team this year, enhancing cross border experience for students.
Jun Hyeok Kwak, team member from CED said: “Winning the Asia Pacific JA Company of the Year Competition is overwhelming, it’s amazing! We are so proud to have won this award after working so hard – thank you to all our supporters. The JA Company Program meant so much to us. We not only grew as a team, but evolved into such a great company. We look forward to exciting opportunities in the future!”
The full list of awardees of the 2016 AP JA COY is as follows: 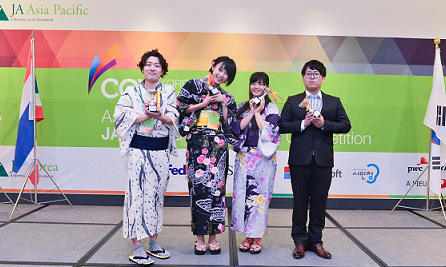 In the 2014-2015 school-year close to 17,000 students participated in the JA Company Program in Asia Pacific. Learning to run a company from top to bottom, these students created and marketed real products and services. The success of the program is largely due to the wide support from business volunteers, who act as mentors, offering expert advice to the students. Partnering education and business is essential to closing the gap between classroom theory and real-world of business.

Vivian Lau, President of JA Asia Pacific, shared “We are proud to see secondary students across Asia Pacific taking part in our flagship Company Program. Through this initiative students are able to gain key insights into the world of entrepreneurship. This is one of the best experiences a young person can have in order to be successful in today’s global economy. On behalf of JA Asia Pacific, I want to express great appreciation to our guest of honor Mayor Park Won Soon for his inspiring remarks on the importance of fostering entrepreneurship to empower the youth in Korea and the region; JA Korea for hosting another remarkable and memorable regional JA student event; our honorable sponsors and judges; and the support and presence from JA Asia Pacific Board and JA Worldwide.”
​
The 2017 AP JA COY will be hosted by JA Japan next year and we look forward to another successful event!