My Glimpse of the Business World Through the FedEx Junior Achievement International Trade Challenge
Sep 11, 2015

An inspiring article "Learning the Business Ropes" written by JA Singapore student Vikram Kannappan from Raffles Institution about his experience throughout the FedEx Express Junior Achievement International Trade Challenge Asia-Pacific competition and the inspiration behind their ideas as well as their learnings. READ THE FULL ARTICLE

"I first heard of FedEx/Junior Achievement International Trade Challenge 2015 through an email sent from my friend and schoolmate at Raffles Institution, Clement Tan. We thought it would be a good experience for both of us, since we were both interested in the business field.

The trade challenge is a business competition that offers an opportunity for students to broaden their understanding of global trade, and to participate in an array of stimulating activities to enhance their knowledge of product distribution, competition, pricing, promotion and sales.

After going through three gruelling rounds of the competition, it has been an unforgettable and enriching experience indeed.

Our journey started in mid-May, when we conceptualised our idea. In the first round, we submitted a 20-page business proposal about our product and the target country we wanted to sell it in. There were over 2,000 entries for the first round collectively across eight other countries.

​We created Stroma, a bag that could be customisable on-the-go, giving the opportunity for limitless designs which were only bounded by creativity.

Stroma was inspired by LEGO, which allows just a few bricks to form variousstructures. We devised a buckle strap system that allows various compartments to be 'buckled' onto the main bag, such that you can even make the backpack into a sling bag.
​
We took around three days to come up with the report. It was tough for us because we had to juggle our school commitments and revision for tests. Since the competition was outside our school curriculum, we could not use school hours to work on it. 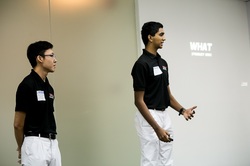 The top 15 teams in Singapore, including our team, from the first round were selected for the national finals, where we had to present a seven-minute pitch to judges of our product idea.

Together with two other Singaporean teams, we made it to the Asia Pacific Finals, held at Copthorne King's Hotel in Singapore. In the week-long competition, we also competed with three other national winners from eight other countries who flew in to Singapore.

This time, we were tasked to create a cohesive market entry strategy plan for a fast food restaurant chain while addressing an economic issue in our target market, Cuba. We had to work on a tight deadline too. After receiving the task on Tuesday morning, we submitted our presentation slides by Wednesday night. We then pitched our idea to the judges the following day. Our market entry strategy plan was called 'Heaven & Hell', a fast food chain that offers the traditional fast 'fried' food and healthy food. Customers could pick their 'Heaven' based on their dietary preference.

Unfortunately, our journey ended during the Grand Finals, as we did not win. Nonetheless, we did not leave empty-handed. We learnt a lot about the thought process behind setting up a business and how to craft and market a product idea in a manner that engages your target market.
​
It was also an excellent networking opportunity, as we got to make friends from different parts of Asia Pacific, who have the same passion for entrepreneurship. We are really grateful to have gotten the opportunity to participate in this competition."