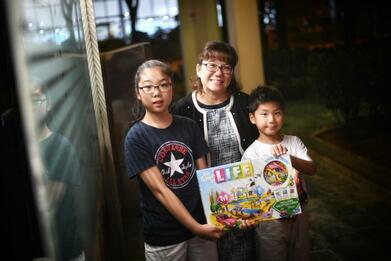 Nathan, aged seven, and Phoebe, five, were each allowed to buy three $2 items of toys and stationery from the Daiso store, while their parents saved the rest of the money for them.

The family has found that using notes in small denominations is a tangible, effective way to teach young children about money.
"It's about breaking down financial concepts, such as saving and spending, so kids can understand, using scenarios that are close to their heart," says Ms Tan, 33.

She and her husband, Mr Elvin Foong, 36, are co-founders of The Treasure Box SG, an online site that sells Christianity-based products and services targeted at families.

More complicated uses of money are challenging to explain. When the couple took their offspring to the bank to deposit their hongbao cash, the kids wondered why the money was being "taken away".

With Chinese New Year around the corner, parents may be mulling over how to guide their children when it comes to hongbao money and other aspects of financial literacy.

One recommendation is to set age-appropriate expectations before the festive visiting begins, says Mr Vipin Kalra, chief executive officer of BankBazaar Singapore, an online marketplace that helps consumers compare and apply for financial products, such as credit cards and personal loans.

He suggests that parents ask pre-schoolers to hand over their red packets to them, allowing them to save the money on their behalf. Primary school children can be given the responsibility of holding onto their hongbao collection during the festive period to keep track of how much they receive.

Those in secondary school and older can be given the freedom to decide how they wish to use the red packets, whether to save, spend or donate the money, says Mr Kalra, adding that this would also provide an opportunity to introduce older children to the concept of investments.

Experts recommend broaching the topic of money before children reach Primary 1, when they typically receive an allowance for school.

Ms Ng Hau Yee is director of Junior Achievement (Singapore), which runs programmes in schools focused on educating students about work readiness, entrepreneurship and financial literacy. She says: "It is important to start financial literacy education (from as young as four to five years old) to cultivate good financial habits. How a person feels about money stems from what he is exposed to, from the time he is a kid."

She suggests that parents can begin teaching pre-schoolers about concepts such as earning, spending and saving, for instance, by taking them to the market to learn about trade and the exchange of money.

Another important financial concept that children should learn, by the time they reach lower primary age of between seven and nine years old, is distinguishing needs and wants, says Ms Ng.

Parents can guide their children through the family's purchasing decisions. For instance, vegetables, fruit and milk are needs, chocolate is what you might want, she says.

Ms Tan and Mr Foong say that teaching about finances is also a way to impart family values.
For example, when their son Nathan had a birthday late last year, they asked him to set aside about $300 from his birthday hongbao to offset part of the cost of a buffet they had catered for his party.

When his parents told him their rationale, he understood the gesture as "returning the love" of relatives and friends at his party by giving them a treat, says Ms Tan.

In addition, when Nathan wants to give to charity, such as by contributing to donation tins for flag days, Ms Tan might give him some of her spare change, but she takes the same number of coins from his piggy bank when they get home.
Mr Foong says this helps Nathan to understand concepts such as "nothing is free" and that money can be used to benefit others.

Other ways of teaching children financial literacy can be through compartmentalising expenses and playing board games, says Ms Angeline Wee, 48, who works in a statutory board.

She gives each of her three children a plastic container with dividers, which contain the $1.50 they each get every day for school.
"I don't give them too much pocket money so they are forced to make a choice, for instance, between getting a serving of canteen food or buying snacks and sugary drinks," says Ms Wee.

Her eldest daughter, Primary 6 pupil Janelle Foo, 11, also looks forward to playing The Game of Life with her parents and her two younger siblings, Noel, eight, and Estelle, 10. The board game portrays life journeys, with milestones such as marriage, children, jobs and retirement.
Janelle says it teaches her about the cost of a home and paying for vacations.

In Ms Ice Lee's family, the grown-up world is used to teach her children about earning money.

Ms Lee, 44, is an image professional in the beauty industry while her husband Louie Tai, 43, is a corporate training consultant. She used to tell Kenneth, nine, and Kathryn, five, that he had to travel for work to earn money for the household and encouraged their children to earn their own money. They are each given about $1 for doing one chore, such as sweeping the floor or washing the dishes.

The couple also encourage the children to save their money in piggy banks.

"Money is really a tool. The concept of saving for instance, helps children think about and dream about the future.